what i'm doing with IM'ing these days

I've made the decision to have a very-public presence so people can contact me easier. To do that I've decided to use the latest versions of AIM, MSN (Windows Live Messenger) and Yahoo Messenger 11 beta.

Here are the new screen names I'm using if you want to add me in:

For those contacting me using my old screen names, don't worry, I'm still using them. The squier327 screen name is specifically for YouTube because of my guitar video stuff, and no I'm not changing email addresses because MSN screen name are email addresses in stupid way Microsoft does chat - although if you do send mail there I will receive it because I have it loaded into Thunderbird via POP. I chose the squier327 name because it was available on all the networks.

I greatly prefer AIM over all other ways of IM'ing. The latest AIM v7.5.7.6 easily connects to multiple PCs with no nonsense involved whatsoever, linking screen names are easy (hence the reason I can use two with no problem), the client is fast, smooth in operation and just plain works. AIM to date is still my favorite IM of all time. 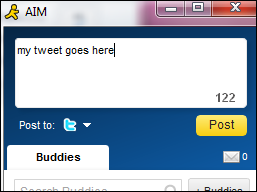 It's a nice little box with a character counter that works exactly like it's supposed to. I like that. A lot.

If I used Google Talk, which I don't, AIM does allow the integration of Google Talk chat right into AIM, much the same way Gmail allows AIM into their mail interface - so even the Gmail users have something to cheer about with AIM these days.

You're probably wondering why I'm even bothering with MSN since it's known I hate that client. Two reasons: First, it's the #1 chat network in the world. I get a good deal of contact over on YouTube, and those users when not using Facebook are using MSN, followed by AIM. That's the pecking order of IM on that site. Second, MSN only works properly with the Microsoft client. Whenever I've tried to use MSN on other clients like Pidgin or Trillian, it never works right.

As far as Yahoo Messenger is concerned, I hate that almost as much as I hate MSN, but said fuggit and registered the squier327 name anyway. People do contact me on Yahoo Messenger, but it's almost always someone that's at least 27 years old and no younger. Is Yahoo IM used by an older crowd? Yep.

In the end, you have to roll with two internet identities

For a while now I've tried to use a single identity where I could use a mix of public and private, but it's just way too much of a balancing act. At the end of it all you have to roll with two, an all-public and an all-private.

In the past I've made the mistake of trying to rehash and older identity I didn't use as an all-pub. That simply doesn't work. When you go with an all-pub persona, you have to start from scratch. This is necessary so you know every single bit of info you're putting out there else you run the risk of dragging stuff into the public domain unintentionally.

You'll notice with all my all-pub stuff that there's no Facebook anywhere. That's obviously done on purpose. Yes, I have considered making a second all-pub Facebook account and tying it to the MSN profile, but that may prove to be too much of a hassle to manage.

The best thing about all-pub stuff is that you can share without fear. Everyone's heard all this talk about privacy, privacy, privacy and so on. Well, cure the privacy ill simply by making an identity that is specifically not private, and go share-all extreme. That's pretty much exactly what I've done. My private stuff stays private, my public stuff stays public, and it works.