If you want a copy of XP for whatever reason anyway, you can still get it. At least for now.

...that hasn't been said a million times before. Well, I'll give it a try.

There's real life and digital life. Some say they're the same thing. Trust me, they're not. Concerning your digital life specifically, you most likely "grew up" with XP.

For many, obviously including myself, XP was the OS you were probably using when you posted your first social media status message, uploaded your first digital photo and watched your first YouTube video.

The reason so many people have such an affection for XP is simply because it's been around so long. When you're around something long enough, you get used to that thing and grow an emotional attachment to it. 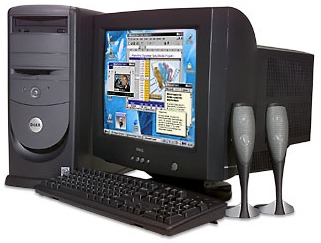 Yeah, that was a pretty bad-ass setup back in the early 2000s. Cool black-and-gray case, black keyboard, black CRT monitor. Stylin', to be sure.

When I think of XP, I think of setups like the one above. Except now, most who use XP still have those same computer boxes that were bought over 10 years ago. They're now old, beat up, probably have an inch or more of dust on the inside of the case and just look like complete crap.

Most computers don't age well because owners never took proper care of them.

How long before XP drops off the face of the internet now?

That's an easy answer. When Google and Mozilla stop making browsers for them.

Microsoft's last version of IE for XP was 8, and to put that in perspective, IE is up to version 11 at the time I write this.

I'll make a prediction here. Before the end of 2015, there will be no more new versions of Chrome or Firefox for XP. Once that happens, watch how fast XP disappears from the internet. It will be a repeat of what happened with Windows 2000.

The last Firefox for Win2000 was version 12. Chrome never supported Win2000. Once Mozilla dropped the hammer on Win2000, that OS disappeared from web server traffic logs everywhere, and fast.

With XP, it'll be the same thing once it happens. And believe me, it will. The companies who make major web browsers have no interest in releasing software for an OS that's not supported by the originating company anymore.

Yes, I am saying that Chrome and Firefox are the only two things keeping XP alive right now. Once they're gone, so goes XP.

Will XP be missed?

You may see some idiotic "SAVE XP!" b.s. out there just like before when Microsoft first announced they were ceasing support and then changed their mind. But this time around? No way. XP is frickin' dead and is staying that way; it's already been around too long enough as it is.