I saw this image in a Reddit thread and saved it here because I think it's funny: 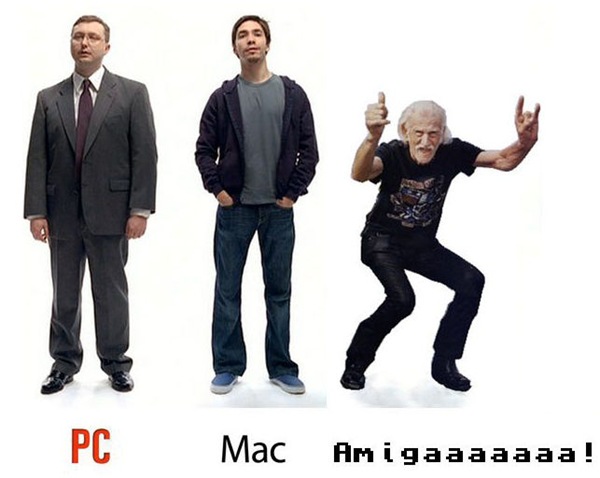 My experience with Amiga computers was back when I was in college. I used Amiga 2000 and 4000 boxes to do basic video editing/animation stuff. You have to remember that this was the early 1990s - back before Windows 95 existed and Macs were using System 7. After college I never used Amiga boxes again, and in fact the year after I graduated the entire computer lab replaced all the Amigas with Macs.

Concerning what's considered old and what isn't when it comes to electronics, Amigas are old. Really old. Like dinosaur old in the computer world. That 4000 box I mentioned a sec ago? That was made in 1992 - 18 years ago.

I do sincerely believe that if Commodore hadn't went out of business that they would have crushed Apple out of existence, and that Microsoft would have never made it past Windows 98. I'm not kidding. Amigas were way ahead of the curve and ran circles around everyone else back in the day.

Think about that for a moment and you realize how bad-ass the Amiga truly was.

It makes me wonder if I should have saved my pennies back then and bought an Amiga instead of plunking down several thousand for an Ensoniq workstation synthesizer.