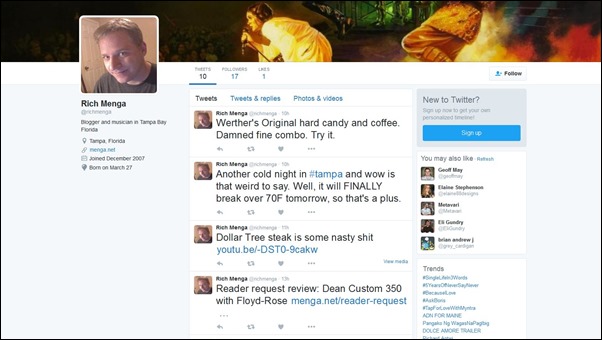 What I did a while back was clear out all my followers and tweets so everything is started fresh over there, and now I'm using it again.

Why did I reboot this? Mainly because some people hate Facebook and some don't like email for contacting me with. Twitter seems to be that thing that everyone can agree upon because they like the @reply way of contacting whom they want. Fine by me.

I would appreciate anyone who follows me there, said sincerely.

Well, not technically booted, but rather shelved. I still use Facebook just like many do, but I took the link to it off this site because I want to push more focus to Twitter.

I started vlogging again on my YouTube channel and am going to try and keep up with it. Yes, try, because making videos is a pain in the ass. I do it because people have been requesting that I start vlogging again for a long time now, so... here it is.