Diet adventures with a rice cooker and other things 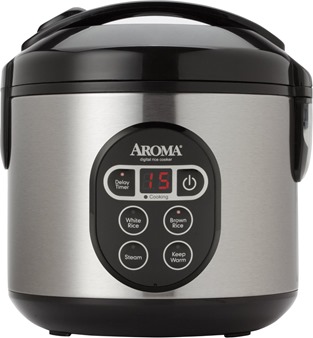 If you're trying to lose weight, you need a rice cooker.

Above is a small 8-cup rice cooker. If you want something that has enough size to cook for a whole family, you get a 20-cup.

I, like many other people, did not realize how cheap rice cookers were, as I always thought it was a rather expensive kitchen appliance. It's not. Granted, there are expensive cookers, but the ones that are $30 do the job just fine. Also, it just happens that the cheaper ones (at least the ones made by Aroma) also serve as steamers, so you can steam veggies in it or anything else you want to steam.

So, okay. Right. Diet. Let's talk about that. This is a subject that's been a very big part of my life as of late, and I might even open up a separate blog just for it because of all that I've learned.

I'm not a fat guy, but I was darned close to it. Since I'm turning 40 later this month, I figured now was the time not just to diet but get a lifestyle change in action.

My initial goal was to lose 28 pounds. So far I've lost 15, and that took a little over a month to do.

How did I do it? Switching over to a plant-based diet and cutting out all carbonated soft drinks.

Was this tough to do? Not for me it wasn't.

What I'm about to tell you is covered in great detail in two presentations.

The first is Forks Over Knives. It's on Netflix. If you don't have Netflix, rent it from Amazon. Don't think about it. Just do it. If you ever needed a kick in the pants to get a diet going that you'll stick with, watch that movie.

The second is Sugar: The Bitter Truth. Search for that on YouTube and you'll find it, it's free to watch.

A plant-based diet does not mean vegetarian or vegan. It just means plant-based. That means no meat and no dairy. However, I take it one step further and cut out as much refined sugar and HFCS (high fructose corn syrup) as I possibly can.

Before switching to plant-based...

There were things going on with me that were what I considered to be weird. Here's a few of them.

After switching to a plant-based diet...

All those weird things going on with me? Gone.

The first one, that being getting heartburn from drinking straight water, totally vanished. Previously, if I drank straight cold water, I'd get heartburn almost the moment the water touched my throat. Not anymore. I can now drink bottled water easily and it goes down smooth just like it should.

The fatigue and lethargy vanished, and I started exercising again.

My memory has improved.

I now eat more, yet am still losing weight because I understand food a lot better now.

On a plant-based diet, a rice cooker is required. It is the thing you will use to cook your rice, steam your vegetables, maybe even make soups with it, and you will use it often.

There are entire books dedicated to cooking with a rice cooker, so if you think there's no variety cooking with one, you're wrong because there are literally hundreds of dishes you can make.

Even if you suck in the kitchen, you can use a rice cooker. How do I know? Because I'm not a kitchen wizard and even I learned how to use one.

If you answered yes to all of the above, congratulations, you know how to use a rice cooker. Yes, it is that stupidly easy to use.

Do I miss filth food?

In all honesty, no I don't.

The filth food I ate routinely was convenience store filth. The only fast food I would eat is Taco Bell, and that didn't happen too often (maybe twice or 3 times a month.) And my traditional meal there was 2 burritos. One small one and one of the bigger ones. However, the convenience store is where I ate the most garbage. Doritos, sodas, Reese's Peanut Butter Cups, "buffalo rollers," pizza slices and things of that sort.

As for other fast food places like McDonald's, KFC, Popeye's Chicken, Church's Chicken, Burger King and Wendy's, I stopped eating at those places a while ago. Wendy's was the last burger joint I went to, and that was months ago. Possibly last year. Taco Bell was the very last fast food place I ate from before I kicked the junk completely. I walked away from fast food with a clear conscience.

If there was any one thing I miss, it's probably soft drinks. Pepsi and Sprite, specifically. What keeps me from drinking that stuff is a feeling of guilt whenever consuming it. I don't feel guilty when drinking water because there's nothing bad about it. But with soda, everything is bad about it, so like with fast food, I was able to walk away from carbonated soft drinks with a clear conscience.

The relearning of food

The diet I grew up with was the Standard American Diet, or SAD for short. It basically means a meat-and-potatoes menu with a minimal amount of other veggies. And no rice. I never ate rice as a kid. It's not that I didn't like it. I was never served it. Why? Because SAD mainly concentrates on meat and dairy.

I thought I knew food. I didn't. I was wrong and had to relearn food all over again.

My diet now involves rice, beans, fruits and vegetables. For the blander tasting stuff, that's what spices are for. Heck, you can even make plain white rice taste like it came out of a fancy restaurant with a little bit of parsley and seasoned pepper.

On a final note, I'll just say this. If you've tried everything to lose weight and nothing has worked, relearn food and get the kitchen appliances you need to cook the good stuff. Get educated, get a rice cooker and just go for it.