do you really save money by having your own washer and dryer? 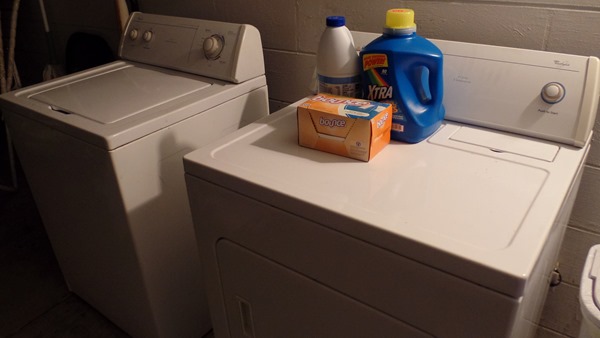 The above was not something I was intending to buy, but had to.

As a running joke, every time I buy anything tech-related that has a sticker on it, it goes on the clothes washing machine. And each time I would label it as an "upgrade."

The last "upgrade" I did was for 21x optical zoom. And you'll notice from that photo link that there's 5 stickers on it. One came from an old laptop, two from a netbook I still own and the last two from digital cameras.

As fate would have it, the day after I put the 21x "upgrade" on the washer machine, it died. Or to be more correct, somewhat died. The spin cycle stopped working because the lid switch for the top-loader door finally broke - about 7 years after I bought the thing.

So I had a choice. Either a) buy a new switch and fix the washer myself, or b) get a replacement clothes washer.

I opted for B, and bought a set, but not just because of the busted lid switch. And this involves a bit of a story.

About 3 months after I got my original washer/dryer set, the regular cycle on the washer stopped working properly. The cycle wouldn't finish. And the reason was because the timer for that particular part of the dial was simply worn out. But on permanent press, the timer worked fine, so I just used that instead.

Why didn't I replace the washer timer? Frickin' EXPENSIVE, that's why. They're easy to install, but not cheap.

The original dryer had its heating element burn out after around 4-ish years of owning it, so that was replaced 3-ish years ago. But over the past 6 months or so, the dryer sometimes slightly burned my clothes, which again had something to do with the heating element, of which I have zero troubleshooting skills with.

So anyway, I had a washer with a wonky timer, and a spin cycle won't engage because of a busted lid switch. I also had a dryer that works fine, but is moody depending on whether it wants to slightly burn my clothes or not.

I was intending on keeping the dryer, because it did still work. But I didn't and went with the replacement set instead.

The beauty of discount appliance shops in Florida

This set I just bought was $254. That's the full price with tax and delivery, installation, setup and removal of the old units. Yes, that means each unit was $127 each.

When you look around in Florida, you can find some truly amazing deals. The place I go to has no showroom. It's nothing but a big purple warehouse with rows and rows of machines. The people that work there are the people who actually work on them. Just dudes in t-shirts and shorts. You just go there, pick out what you want, and that's that. No pushy salespeople. No pressure. My kind of place. 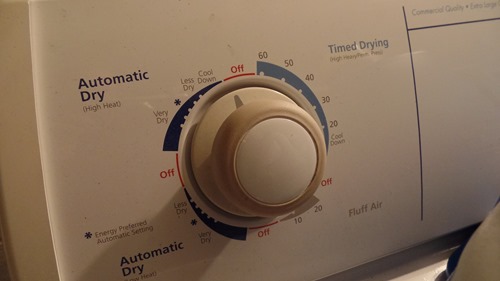 Based on the control panel font, I'm guessing the Whirlpool W/D set I bought was made in the mid-to-late 2000s.

I'm fairly certain my old washer was a late 1990s or very-early 2000s build. It lasted 7 years, so it's not like I can complain about it. And even though my first dryer lasted 4 years and the second just 3, that's still not bad, and I'll explain why right now.

Does a washer and dryer pay for themselves?

Eventually, yes. But it depends how much you spent initially for the W/D set.

It's about $1.50 per load at the laundromat, but you have to spend that twice because one is for the wash and the other for the dry. So that's 3 bucks. But then there's the cost of fuel to get there and back home. Tack on another buck for that. Every time you go to the laundromat, that's 4 bucks spent. If you do 2 loads a week, that's 8 bucks/week spent. Over 52 weeks (1 year), that's $416 for a total of 104 loads. And that's not including the cost of soap or dryer sheets.

If you spent $900 on a W/D set and divide that by $416 for a year's worth of what you would have spent at the laundromat, that set pays for itself in a little over 2 years.

The $254 I spent on my W/D set however will pay for itself in a little over 6 months.

And yes, that means if my W/D set lasts beyond 6 months, that's when I start saving money because the purchase cost will have been recovered at that point.

Fancy dan features mean nothing if the price is high

There are some W/D sets out there that sell for $3,000. What you get from spending that kind of cash is the ability to wash really big loads, and other stuff that will do nothing but break quickly.

The big-load stuff is like a 5.5 cubic feet washer and a 9.5 cubic feet dryer. That's huge, because the basic stuff is a 3.5 cu. ft. washer and a 7.0 cu. ft. dryer. However, some people need the big stuff, and that's understandable.

What's stupid however are front-loader washers. Guaranteed to break early. Other stupid things are digital readouts, membrane keypads, lights of any kind and a whole swath of other junk that does absolutely nothing to clean clothes better.

A $3K set will take over seven years before it pays for itself.

Think it will last that long? It won't.

While I was in the warehouse buying my W/D set, I saw one of those fancy dan sets. It was "stylish" red, a recent build, and, of course, broken. The washer was taken apart and a guy was working on it. The inside was ridiculously complicated for no reason other than to be complicated. I'm sure the set probably did sell for $3K originally. After the rebuild/repair, that warehouse will probably sell the set for $1,500 or so. And yeah, they'll sell it because some fool will buy it.

Don't be one of those fools. Stick to the plain white boxes. They're cheaper, work just as good and last a heck of a lot longer.