On the nüvi 205 there's this new feature called ecoRoute. It doesn't come bundled with the unit. Rather you have to download a firmware update to get it and it's free.

I was able to snap some good screen shots of what happens when ecoRoute is running: 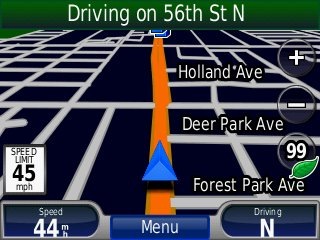 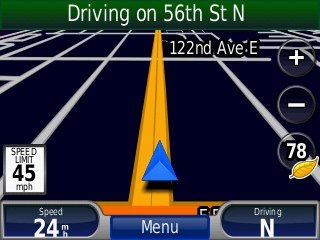 Whenever stopped, the leaf is red because when you're not moving, you're wasting gas.

ecoRoute puts a huge emphasis on "keep moving". And its correct because when you're moving you're making the most out of your fuel.

There's far more to ecoRoute than just the leaf and score. Full reports are available and you can configure it to suit. It is a VERY cool thing to have.

This is what ecoRoute looks like in daylight mode: 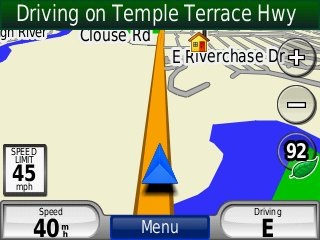 ecoRoute combined with the noted speed limits (on roads that it knows them) is a very in-your-face thing. When you see it, you do slow down, you do accelerate slowly from a stop and you do brake slowly when stopping to keep that leaf green and keep a high score as much as possible. It literally feels like a real-life video game and that's pretty cool.

The best part is that all this stuff really works and had no idea it would work so well.