As of recent I've been doing a lot of email archiving research for work, such as move mails from Outlook Express to Windows Live Mail to Mozilla Thunderbird to Hotmail to Gmail, etc. I also did research on how to download mail from any webmail provider as well.

During this research it occurred to me..

Wait a sec. I have emails dating all the way back from 2001 stored on CD. I wonder if I can import those into Thunderbird?

(If you don't like/don't care reading the nerdy crapola, skip to the next page at the bottom.)

It turns out I had not one but three CDs of ancient emails. Two were archives from 2001, the other from 2002.

And I was able to get all the mail data off of them. Every single mail.

The way I was able to get these emails all imported into t-bird was nothing short of miraculous.

First, all three CDs were damaged. They were scratched and pitted. But luck was on my side and I was able to recover all the mail data from each disc. I converted them all to disc image files via Nero Burning ROM, so now if the discs go beyond repair, I'm not worried because I have image backups.

Discs 1 and 3 were Eudora 5.1 mail archives. Actually, I can't really call them archives per sé because they were simply copies of the MBOX files, directories and file attachments.

Thunderbird can easily import Eudora MBOX file data - however it does not associate the file attachments with mails, so some of the mails I imported had the text but no attachments were there any. For those wondering why this is, Eudora was purposely designed to put file attachments in a separate directory per mail account called "attach". Weird? Yes. But that's the way Eudora did it. This didn't concern me too much because the PST archive covered most of the missing pieces.

Speaking of which, disc 2 was a Microsoft Outlook PST (i.e. "Personal Folder" archive). This was either from Outlook 98 or Outlook 2000. Most likely 2000.

Fortunately I had a copy of the MS Office 2000 suite. I loaded up Outlook 2000, imported the entire archive, then exported/imported to Outlook Express 6, then exported all the EML files out, then imported into Mozilla Thunderbird.

It all worked. All the EML files had the correct timestamps, complete full file attachments and not a single one was corrupted. I'm amazed it worked.

The craziness of it all...

Two of the discs were burned in early 2001. This means at the time I performed the backup originally I was using Windows 98 because I didn't get XP until later in the year (2001 was the first year XP came to market).

As I recall, I had a 2x CD burner made by Creative Labs. I had no accessibility to USB back then. It was either floppies or CDs.

You also have to realize that these CDs are eight years old.

Like I said, the fact I got all this mail into t-bird now in 2009 is miraculous. It should not have worked. The discs were not well kept whatsoever. I found all three of them in a stack of discs with no jewel cases, no paper sleeves, nothing. Just in a stack.

Ready for a trip down memory lane?

I found a lost of history in the emails I recovered. Some happy, some sad, some just plain weird.

Go to the next page to get the scoop on what I found.

I have to give an introduction before giving you the goods, so to speak.

The internet in 2000 was a much different place. In addition, I was a different person back then. I was 25 that year. To give you an idea of how long ago that was, I will be turning 34 this month (on the 27th as it does every year obviously).

A few important points of note:

Oldest email I have

The oldest email dates back to September 28 2000, 7:28pm. It's from NetZero, with subject line "The Defender - September/October 2000 4th Edition". This was their newsletter. I have no idea if they still publish this. 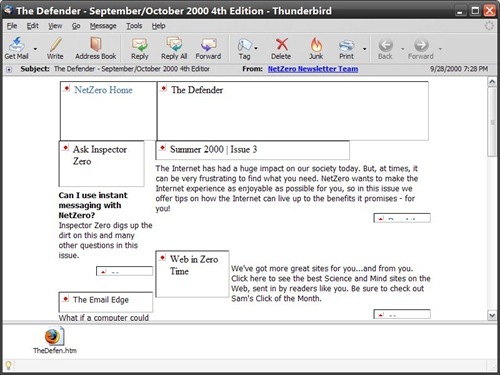 None of the images work because they're trying to load from an external web site, and obviously those images are long gone.

Oldest email from someone I still know

An email from Ritch Davis. He used to run a "web zine" called Muse It. The email was received October 13, 2000 and the content was publishing stuff for the site he was running at the time and I was assisting with.

Second oldest email from someone I still know

I'm sure this will make her squee, but yes it is Barbara. Yes, that Barbara.

I have an internet greeting card from her, dated October 24, 2000 @ 10:27pm. She just (barely) missed having the oldest email from someone I still know in my collection by only 11 days. 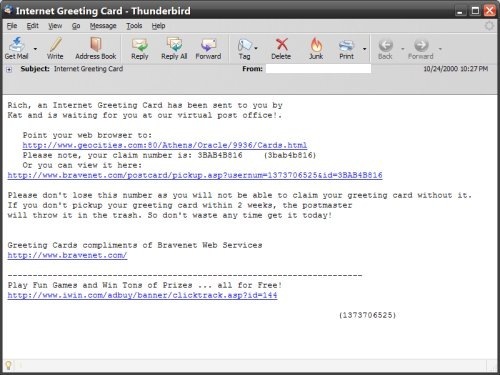 She had sent me an online greeting card. The link unfortunately doesn't work anymore when you put in the "ID code". DRAT! (Greeting cards back then sent you a "code" in email with a link to a site. You clicked the link and entered the code to see the card.)

Oh, and something else too. I actually have a few emails from her back when she was using her cliokat account. Trust me, that's old-school. 🙂

Oldest email I have from someone I don't know anymore

It's from a girl I dated from Biddeford Maine. If by some weird coincidence she reads this, hi! Hope you are well. 🙂 I'll keep her name private out of respect for her privacy.

The email is dated October 13, 2000 @ 5:51am. There's nothing I can really quote from it without embarrassing the crap out of her (it's kinda that lovey-dovey schmoozy stuff), so.. sorry guys. Some things are best kept private.

I can say that the emails are loooong. We traded mails old-school style where we wo
uld cut n' reply to certain parts of it. Nobody does that anymore, but we did.

I do wonder if she saved any of the mails she sent me back then. She was using an ICQmail account at the time. I seriously doubt the email account she used then is still active now (and if so that would be nothing short of amazing).

If she doesn't have that mail account any longer (which is probably true), I wonder if she even remembers what she wrote to me. Bear in mind this was 9 years ago.

An email from the International Webmasters Association. It had account information listed in the mail. The link to login was dead, however the main site still works. I tried the login/password from there, and ta-da - STILL WORKS. Unbelievable. 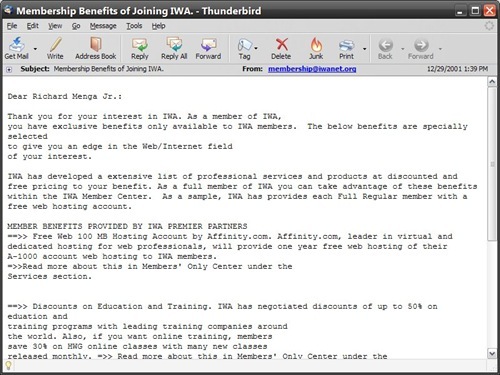 An email from Oldsmobile

Oldsmobile was a automobile division of General Motors. Yes, was. They no longer exist. 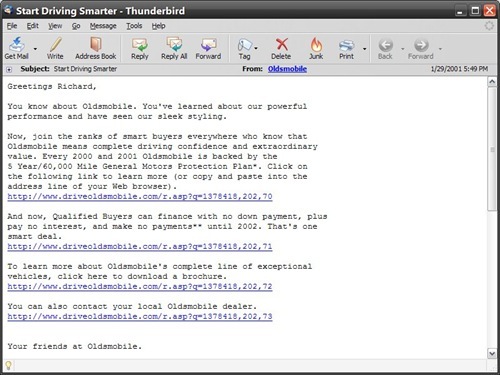 Below is the top content of the email (the rest is just sales pitchy stuff). All the links seen forward to www.oldsmobile.com now. Whatever was there before is gone now.

You know about Oldsmobile. You've learned about our powerful performance and have seen our sleek styling.

Now, join the ranks of smart buyers everywhere who know that Oldsmobile means complete driving confidence and extraordinary value. Every 2000 and 2001 Oldsmobile is backed by the 5 Year/60,000 Mile General Motors Protection Plan*. Click on the following link to learn more (or copy and paste into the address line of your Web browser). http://www.driveoldsmobile.com/r.asp?q=1378418,202,70

Your friends at Oldsmobile.

Dot-coms that once were

I've got several of these. All of these sites are either gone, squatted or changed significantly.

This is one one Ritch owned. Squatted.

Both are now Microsoft Office Live.

Squatted. It is archived on Wayback. The site design including all the graphics was done by yours truly.

Pronounced "go link". Wayback shows it as a place that allowed you to build web stores (this was dot-com boom time, remember). The site is in fact still live but now shows nothing but a simple page with the domain name.

Shows nothing but a "coming soon!" message. Wayback shows it used to be a job search site.

This is a good one and takes a little bit to explain.

MP3.com was, repeat, was, the biggest musician site on the internet at one point. Then out of nowhere they folded and closed shop. You know how MySpace is full of endless crappy bands that tart each other out? The predecessor to that was MP3.com.

This site was basically the only place where musicians could upload their MP3s so they could be heard. It had a huge community. Huge and active. It was a GREAT place to be at one point. But like I said, they just up and closed one day. The reason? Dot-com crash. The site lost all the cash it had and folded in short order. The Wikipedia article on that site explains the fall of that site somewhat. 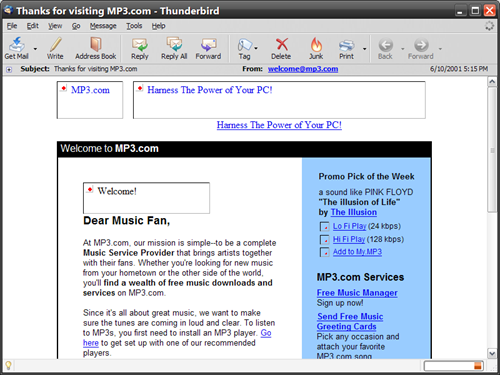 Gone. Nothing loads. This was a site that promoted putting little games on your web site via some JavaScript code or some crap like that. Site is still registered but goes nowhere.

I have more from gone/changed/squatted dot-coms, but you get the idea. 🙂

Read about what I think of all this history stored as little bits of data..

My digital lost box in the attic

Imagine for a moment that you stumble upon a musty old box. Maybe you found the box in an attic. Or a basement. Or a friend's house. Or wherever. Doesn't matter.

You open up the box and inside are love letters from past loves, letters from friends, including pictures, from people you know and/or knew, and a whole treasure trove of stuff you totally forgot about years ago - all about your life and what you were doing at the time.

Wouldn't you be happy to find that?

When I restored all that old email, and it worked, I was ecstatic. Happy, happy and more happy. I couldn't believe all the stuff I got back. Letters, photos and tons of memories. Some good, some not-so good - but that's okay. They're all there. In original form. There's no way to put a price on how valuable this stuff is to me.

Bear in mind the the CDs that I restored the data from have traveled quite a bit, and could have easily been lost and/or destroyed in transit.

And now those seemingly insignificant little bits of data serve as an archive of what my life was back then.

It is nothing short of amazing that all this stuff was sitting on three scratched up and pitted old CDs that haven't been touched for nearly a decade.

And yes, it's backed up now. Properly. 🙂