How I avoid mindless eating 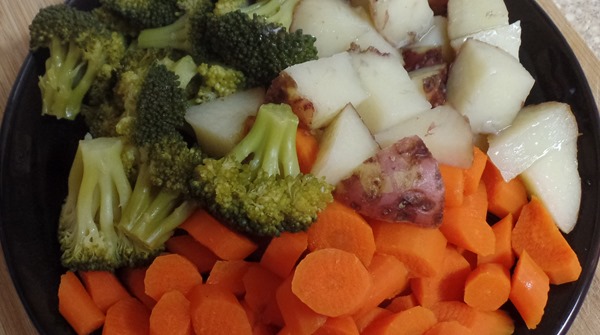 When you retrain your brain, you start eating better.

I don't take the best photos of food, so forgive the quality of the photo above showing a broccoli, carrots and red potato plate I put together. To be specific, what you're seeing is one stalk broccoli, one medium red potato and roughly about 3 to 4 full length carrots sliced. And yes, I know the red potato skin is a bit on the ugly side, but that's just how potato skin is sometimes.

This plate was ready-to-eat in 20 minutes as all the food was steamed all at once. With light salt and butter, the total amount of calories was probably around 275.

Before cooking and eating this, I thought to myself, "I really could go for a pizza right now" and thought about calling the local pizza house to place an order. I decided not to do that and put together a plate of veggies instead.

Ever since I lost weight (see my book for info on how I did that), one of the reasons I've stayed thin is because I avoid mindless eating.

How do I avoid mindless eating? I think.

What I find is that when I answer those questions in my head, the craving I have for filth goes away quickly. If I'm still hungry, I'll simply eat something else that I know to taste better, such as vegetables...

The bad photo I took at top does show something that filth food doesn't. Color.

The only time I don't see brown in filth food is when it's been artificially colored. Typically, I see the most coloring in hard candies, snack cakes and breakfast cereals (although a lot of those are also brown). And of course, the coloring is never anything that looks natural. You'll never see a sugary neon yellow cake grow out of the ground, that's for sure.

While there are healthy brown foods such as brown rice, mushrooms, some potato varieties and nuts, that's not what people imagine when they think of brown food. Rather, it's the filth food that comes to mind.

When a craving comes and you go for the filth, just stop, think and question what you're doing. Overcome that craving (it's easier than you think) and then eat something better, as in not filth, or just skip it until a proper mealtime comes.

Believe me, you don't need that brown crap no matter how much you think you do.