There's a new design here, so CTRL+F5 it for a refresh.

This is the first time I've had a design that requires 1024x768 to view it. At this point I was just sick of the 800x600 thing. There's hardly anyone using that res anymore, so there's really no point. And if you're one of those that does use an ancient clunky computer with 800 res, well.. get with the times. 🙂

I tried out a few WordPress themes before (once again) designing my own. As I said in my last post, the problem with pre-fab themes is that there's just too much crap in it you have to undo just to make it work right. 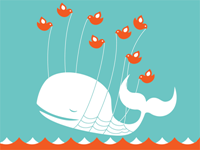 Concerning internet social crap, I've been getting distant with Twitter and Facebook simply for the reason I'm becoming disenchanted with both.

I have always, repeat, always hated Facebook. The interface is nothing but a big ball of suck. In addition, Facebook seems to be a new phishing problem with it every other week.

The only reason I have a Facebook account is if anyone wants to "friend" me on it. Otherwise I never use it. Officially, Facebook has the same value to my as MySpace does, which is zero. If you want to add me as a friend on your Facebook, be my guest. I don't have a problem with that. What I do have a problem with is the system itself.

Twitter is also become irritating for me also. I keep getting these idiots who create accounts and "follow", which of course sends an email notification to me. Then I check and it's some idiot begging for click-thrus to make a buck.

Shortly after that (usually within 24 hours), that idiot's account is deleted from the system for, of course, spamming.

You will notice from my Twitter profile that I don't have a lot of followers, nor do I follow many people. I know some both in personal and professional circles that do wonderful things with the service and follow-follow-follow until they're blue in the face. But I'm not one of those people.

Again, if you want to follow me there, be my guest. Just don't expect me to be super-duper-pooper social on it.

I have entertained the idea of starting over with Twitter completely using my name instead of my old username. I already own one using my name and have for some time. For those keeping score, the old name was created Dec 5 2007 and new one on Jan 17 2009.. which for some reason doesn't sound right because I could've sworn I reg'd it in 2008. But that's when the When Did You Join Twitter? site says I did, so I guess it's true.

I've come to the understanding that using your real name on Twitter is the better choice for social reasons. In fact it's just better if you use your real name whenever you can no matter what the system.

It used to be that most people knew me by my old screen name as my internet identity, but that's not the case any longer. My name (particularly my last name) is what people know me by now.

So I dunno. Maybe I'll start over with Twitter using "the real me" although it was the real me all along, just with a better identifier.