There are some who will read this and get a bit miffed at me because the first reaction will be, "HEY! How come you didn't ring up and say hi or stop by?!" There are two reasons why I didn't. First, I never announce publicly when I'm leaving to go on a trip on the internet because that's just stupid. Second, this was a family trip, just for family and only family. My trip was planned months in advance so the time I spent there was planned before I even arrived. Also bear in mind this is the first time I've been back to New England in close to seven years. Yep. Long time.

Anyway, that being said..

I took a trip to New England to see sis, take a tour of Boston, some other areas of Massachusetts and another tour of where I grew up in northeastern Connecticut. I'll start with Boston first. 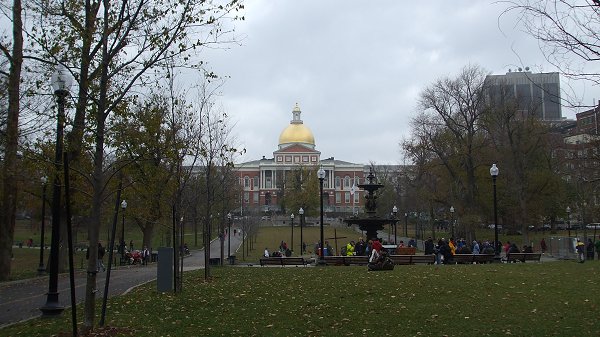 Boston is a cool city. It's very well-used, but that's how most northern cities are. The day I visited was a bit on the gloomy side but I enjoyed it. When walking around Boston you can see the influence it has had on many movies over the years because it defines what an eastern US big city is supposed to look like. 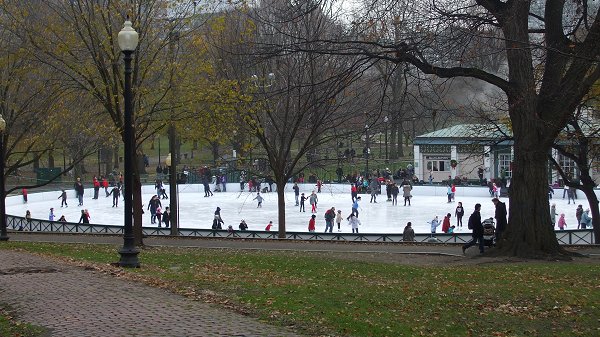 I visited several areas of beantown including Quincy Market (otherwise known as Fanueil Hall Marketplace) and also got to see several parks including the one shown above where the Zamboni machine smoothed out a fresh coat of ice on Frog Pond in the Boston Common for families to ice skate on.

I ate well, walked around a lot, totally soaked in the Boston experience and it felt good. 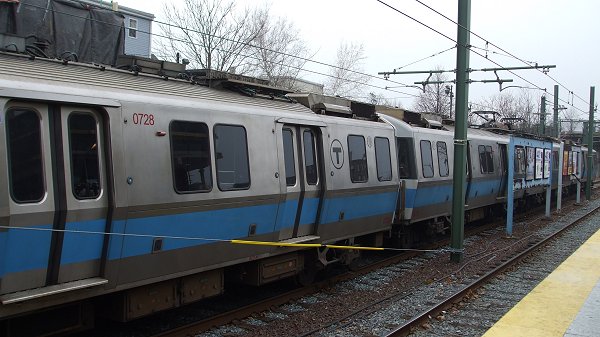 Another thing I wanted to do was take the electric rail system, simply called the "T", which I did a few times. You can see the routes here. A temporary card you can use (which I also wanted as a souvenir) is called a "Charliecard"; there are terminals at each rail station where you can add in fare when you need it.

The T cars look better on the inside than the outside, no question there. 🙂

In Webster, a town in MA I spent a good amount of time in as a kid, there's a location which is called Webster Lake - but that's the short name. This is the actual name of the lake: 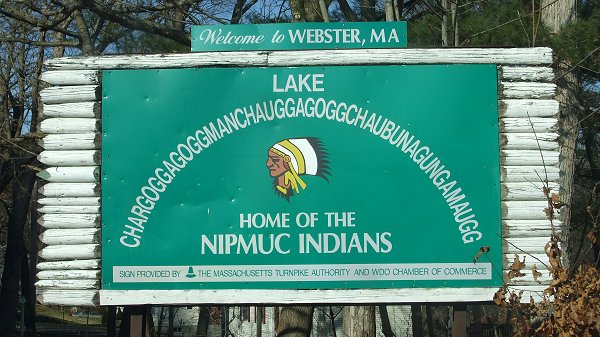 Sis and I drove around specifically looking for this sign just so we could take a photo of it, because nobody ever believes us when we tell people the real name of this body of water is Lake Chargoggagoggmanchauggagoggchaubunagungamaugg.

Translated literally, it means, "You fish on your side, I fish on my side, and nobody fish in the middle." And yes, it is the longest place name in the United States and also qualifies as one of the longest in the world.

And yeah it takes a few times before you can actually say it right. Now you know why everyone just calls it, "Webster Lake". 🙂

In Windham County, CT (my stomping grounds), a.k.a. "The Quiet Corner", I saw all the new stuff that was built after I left the area in 2006. What surprised me more than anything else was how many things didn't change. But before I get into that, I'll talk about the things that did change.

For what I'm about to tell you, there's no photos of it because if you've ever been in any other part of modernized America, you've already seen this.

When I left, the Killingly Commons was under construction. This is a large parcel of commercial property that was developed where the old Anchor Glass Container property which had been sitting there for about 20 years if not longer used to be. In there you see your standard fare of retail stores. A Lowe's, a Bed Bath & Beyond and so on. Very typical. On the particular day we went the shops were almost empty (it was a weekday).

It took Killingly a long, long time to get modernized. The stores in the Commons look nice even if it is the typical corporate-branded retail shopping stuff (you've seen one Bed, Bath & Beyond, you've seen them all).

In Putnam, CT I saw what happened to the old Kmart plaza. A Price Chopper supermarket was placed in there as the large anchor store, and it was surrounded by smaller stores to fill up the lot. It's definitely better off than how it used to be. In fact, it's pretty much a night-and-day difference. Had you seen that lot in the 1990s, you would have never guessed it would end up as nice as it looks now.

Back in Killingly, sis and I drove around to what was the Killingly Cinemas 3; a small three-screen movie theater that had changed ownership a bunch of times. At this point the building is still there but no theater and it looks like it's been closed for a few years now. The last movie I saw there was Star Wars: Episode III - Revenge of The Sith back in '05.

In the same area we also went to a park I went to many, many times as a kid - Owen Bell Park. It looks basically the same as it did plus a few new playground things for the kids.

What got me however was a "sculpture" (I think?) that's been there as long as I can remember. I think it's been there since the mid-1970s, been repainted a ton of times (of varying colors) and is always put in the same spot. The only time this thing isn't there is when it's taken by the Parks & Rec crew to be repainted (yet again).

Don't even ask me what this is, because I couldn't tell you. 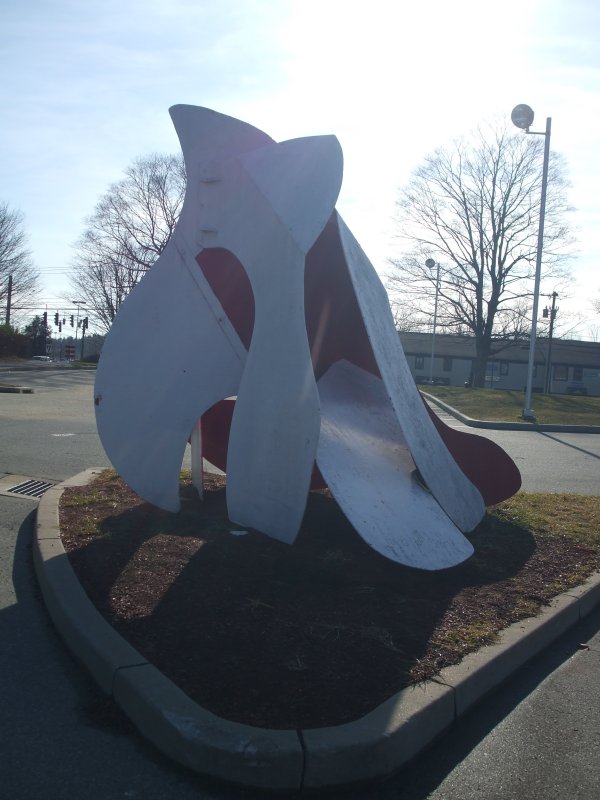 Sis and I both recognized the thing above and took a photo of it. I've no idea who made it, what it represents (if anything), whether it's supposed to show letters or not.. I have no clue. But I know it's as old as me if not older.

Okay, now here's the part where I get all philosophical and whatnot.

What I had thought before going back to New England for a visit is that everything would have changed and be totally different. But that's not what I experienced. Yeah, I saw some new shops, some renovated places and so on, but the overall feel was basically exactly the way I left it.

New England prides itself on being traditional almost to a fault. In other words, things up in those parts change very, very slowly. In Boston for example, I saw a Boost Mobile shop where the only thing new about the shop was the store sign. Otherwise, from the outside it looks very traditional. In Windham County, CT I saw several things where if you turned back the clock 25 years, things look exactly the same today as they did from decades ago.

No, I'm not saying to tear it all down and replace with new, because that's not the way New England works. Never has, and never will. I'm just saying New England has a consistency to it that surprised me a bit, but at the same time didn't. I can't really explain it any better than that.

The best word to describe New England is that it has character. Anywhere you go in those parts, you'll find character, as in things that define an area. The people, the places, the way the roads are, etc. I got re-familiarized with New England's character quickly only because I know it so well, and the fact that not much had changed since I left.

I had a good time in New England. The food was the best I've had in years, the company was great, I very much appreciated the old ways of how things are done up there, and it was just cool all around.