If I had a cable subscription (I don't because I don't watch TV), the only channels I would probably ever watch are The History Channel, The Learning Channel a.k.a. TLC, The Discovery Channel and Game Show Network a.k.a. GSN.

I'm big on Americana, and being my college degree is in Video & Radio Communications I also like television shows of yesteryear because they are to a degree a sort of video time capsule. Being that local TV news stations do not release their old broadcasts on DVD (which they really should do because people would buy them in droves), the only way to see real non-actor people is to watch old game shows.

GSN is awesome because not only do you see how people used to dress, but also see popular hairstyles of the era and the popular products of the time and what things were worth years ago.

Per the title of this post, a "whammy" is a bad-guy cartoon character on Press Your Luck (my favorite game show of all time) that takes away your winnings.

This is a whammy: 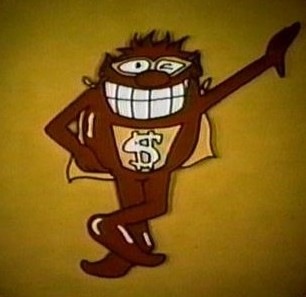 This is the whammy in action:

If I had cable, there would probably be certain days I'd waste away watching hours of GSN for stuff like the above. I'd watch all the classics like Family Feud, Classic Concentration, The New Tic Tac Dough and so on.

Not everything gets on GSN, however. There were several shows that will probably never re-air on that channel, one of which is Home Shopping Game.

Home Shopping Game is, in a word, weird. Granted, all game shows have a fair share of weirdness to them, but this game show is weirder than most because it was a combination of regular game show + home shopping at the same time. You can read a full description of what they tried to do here.

I want to make clear I do not like this show at all for several reasons. There's no live audience (you can tell just by listening to the recorded claps), the set is tiny (made very obvious that the shot on the contestants is very close and tight) and looks like something straight out of the 1970s - even though this was recorded in the late 1980s.

The weirdest part is when the game host gives his role to a co-host (i.e. a salesman) to hock a product, then hands it back to the game host. Like I said, this is just plain weird, even by game show standards.

Even though this show is crap, it is a fun watch seeing the half-assed low-budget attempt by Home Shopping Club attempt to pull off a game show - and failing miserably at it. 🙂