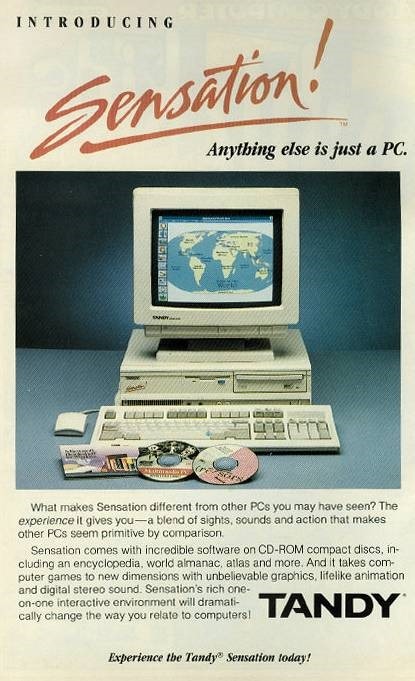 RadioShack filed Chapter 11 bankruptcy. Another one bites the dust.

Yep, it's true. RS is basically going out of business. RS has gasped its last breath. Stick a fork in it, it's done.

I have a unique perspective on RS because my late father worked for the company for 15 years. And even I worked for RS for a short period of time as a summer job, so I figured I'd write my thoughts about RS.

There was a point when there was a RadioShack store almost everywhere in America, and the reason for this is because there were corporate-owned stores and what were known as "franchise stores." The franchise stores were guys who ran their own RS stores and carried RS products, but were smaller shops.

This was at a time when RadioShack still went under the name Tandy Corporation, and only carried Tandy products and brands with RadioShack as the storefront name. Brands like Tandy itself, Realistic and later on Optimus.

RS stores had everything electronics that the malls didn't have. Parts and components galore. Fuses, capacitors, antennas, radios (of course,) cables, switches, knobs, circuit boards... there was just a crazy amount of stuff that they packed into those stores. And it was very fairly priced stuff, too.

The Beginning of The End, so to speak, was when Tandy decided to dump all the franchise stores. But that was nothing compared to what was coming...

In the latter half of this decade was when RS really started to suck, and it started in 1995.

This was really stupid, and one of many fumbles Tandy did in their long line of really bad decisions.

These days, most established corporations are smart enough to know not to screw with a logo that's been around for over 20 years (the old logo ran from 1974 to 1995.) But the trend in the 90s was to "look modern," and the end result was a cold, overly corporate-looking, unfriendly, stupid new logo. It sucked, and always sucked.

However, there was something far more insidious that happened before the logo change. And that was the invasive collection of customer information.

Everyone today is familiar with retail stores that want every single last scrap of personal information about you. Your full name, your full residential address, your phone number and so on.

RadioShack started doing this way before everyone else, and at the time it was considered very offensive to ask for such information of customers. RadioShack did it anyway.

The backlash from it was so bad, that stores (and I saw this in person at the Putnam CT store) put a notice about 8x10 in size on the back of the retail terminals where the customer could see it that said, "Why does RadioShack want my personal information?" A big mugshot of the CEO with his fake smile accompanied that along with a blurb about how giving away all your personal information to RS was "important to improve customer service."

It got so bad that the store manager had to input a fake customer into the POS system, "Cash Sale" (first name Cash, last name Sale,) for people that got ticked off when they were asked for personal information on every single frickin' sale the store made. And believe me, customers got really, really vocal about it.

When I worked for RS as a summer job, I was ordered by the manager to always ask for personal information. I'll tell you a small story about that. An elderly man came in the store one day to buy a battery for something. He went and got his battery, came to the register, and I, as cheerfully as I could, asked, "Can I have your ZIP code please?" He glared at me for a moment, didn't say a word and then walked right out, leaving the battery on the counter. I never saw him come in the store again after that. Customer lost. Probably a lifelong customer.

In the early 2000s, all the RadioShacks were redesigned with a claustrophobic layout. Instead of the open, airy feel where customers could browse freely, now all the stores put these ridiculous mini-stations everywhere, creating a cramped environment. It was awful.

What I remember most of the early 2000s was this huge, huge push to sell satellite television. RS had a total chubby for this and it was push-push-push to get those damned dishes out the door. Really annoying.

This is also the decade when RS realized that they were selling a ton of cell phones, so they decided to go all-in with it.

When RS went all-in with cell phones, that was when the old RadioShack was gone forever. RS went from being a proper electronics store to nothing but a sea of cheap, plastic bricks.

The very last time I went in to an RS, this is what happened.

There's a specific audio connector that only RS has, so I go there to buy it. I do so, pay and leave. But when I get to the car, I notice it's the wrong part. I go back in to exchange it.

This is where things got ugly.

When buying the thing, there was no personal information required.

To return the thing I bought just seconds before and exchange it with freshly printed receipt in hand? They needed everything. Full name, full address, phone number, blah blah blah blah blah freakin' blah. Also, I had to wait TEN MINUTES for the manager to come out just to complete the return because the dope at the register wasn't authorized to perform returns (huh?)

That happened about 2 years ago. I've not been back in a RadioShack since.

Did RadioShack die when the catalog stopped?

The last RadioShack catalog was released in 2005. Some say that when the catalog stopped, that's when the RS truly died.

I personally believe RS died way before that. While I can't remember the exact year it happened, it was when RS stopped carrying RS brands, replaced by overpriced RCA and other assorted junk for the same bloated prices you'd find in the mall. I think this occurred in the late 1990s, but don't quote me on that. The point is that nothing in the store was fairly priced anymore after that. Everything was expensive in an RS now.

It used to be that you could get good, cheap electronics and accessories in RS that were a really good deal. And the upper-priced stuff was worth paying for. But that all went away.

It also used to be that RS had knowledgeable sales staff. The days of that ended when RS became a plastic brick store. Because the stores were losing money hand over fist, they would hire anyone with a pulse, including those who could barely speak English (not an exaggeration.)

Why did RS start losing money? A lot of bad decisions. RS had a really good thing going, but kept bungling over and over again. They could have tapped into the educational market, but didn't. They could have worked deals with cable companies for equipment both for corporate and consumer, but didn't (they went with satellite instead.) They could have done a lot of things that would have kept RS being the cool place it was, but didn't.

In the end, RS got swayed in by the lust of cheap China-made plastic bricks. And it did them in.

On a final note, the PC at top is a Tandy Sensation! PC. I remember when those first came out and I wanted one so bad. It was MPC 2 compliant, and that to me was just the coolest thing ever.