Here are some of my thoughts on how blogging is these days. 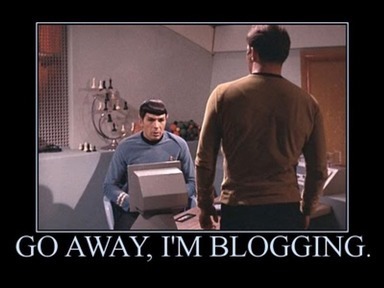 Even though the first post on this blog was from May '04, I technically started the month prior, April. There was a blog engine I tried, but it didn't work that well, I lost the posts that were in it and started over with another engine that did work. The posts lost from April weren't anything special as it was mostly just "this is a test" type of stuff.

In 2004, I blogged because it was a new and interesting thing.

Facebook, the go-to social site at the time I write this, is ridiculously restrictive. Bloggers don't like restrictions; this counts not only for the body of content, but also for links and formatting. For example, you can't mix text + photo + video in a single Facebook status update. Not possible. Oh sure, you can link multiple items, but you can't show multiple items. Big difference. Here on my blog I can mix around whatever kind of content I want.

Forums, while not as restrictive as Facebook (that is unless the admins or mods are total pricks), are not meant for long-form content. Yes, you can mix around text + photos + video and that's not a problem. But that's not what a forum is made for. Forums are for discussion first and always. Posting things article-style to a forum doesn't work that well. Yeah, you can do that if you want, but... eh. I find that "going long" with content is still best left to a blog.

In 2014, if you have comments enabled, you're just asking for people to digitally pounce on you. At some point, some little twit that hasn't even grown pubes yet will come by your blog and post a "fuk u" as a comment. It doesn't matter what you blogged about. Your article could be information on the maintenance of a refrigerator, how to change a tire on a car, how to install a toilet main, etc. And it could be your article is 100% professional and proper. Doesn't matter. The twit will show up and "fuk u" your post.

Well, not here. I disabled comments on my blog very much on purpose.

"But I had something nice to say!", you may be thinking. Maybe you did. But the twits outnumber you 100 to 1, unfortunately. You've seen twits on the internet, and you know their comments always outweigh the civilized ones from people like yourself. These twits didn't exist in 2004. They do now.

Every twit on the internet has access to Facebook, Reddit and forums where they can link to anything they want, including anything on this blog and post their stupid comments about what they link to as much their greasy little fingers can type. Fortunately for me, the twits are too stupid to know how to link to an article here. To copy/paste a web address out of an address bar is a foreign concept to a twit that lives off a diet of Mountain Dew, pizza and Cheetos. Heck, who am I kidding? Those twits don't even know what a web address is, let alone know how to copy/paste one. Yeah, I'm pretty safe from the twits linking here, so I'm not worried about it.

Big Social Web basically means that too-big-for-its-own-good web site (e.g. Facebook and Reddit) where everyone goes to post dopey things. BSW was in its infancy in '04 but is now a very established "thing" for the moment.

BSW sites will at some point die off. When? Not sure. But they will.

What will be next? Smaller standalone internet communities. People are just sick of BSW and would rather be a part of something smaller that speaks to them on a more personal level.

Where will blogs stand once BSW dies off? The same place they always stood. The blogs will remain, with the ones that are updated routinely found in search and linked to by those who have a brain.

As for where people will go to chat with each other, you can expect smaller forums to become more popular again.

In other words, 2004 will repeat itself, internet-wise. And that's not a bad thing, because the internet before BSW was a lot more civilized; it will return.