the drawn together movie: the movie! 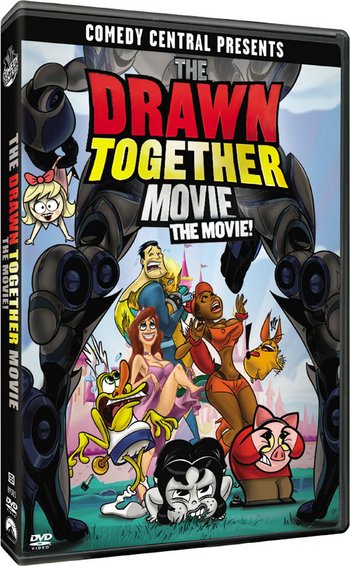 Drawn Together is a cartoon that I watched a few episodes of on the Comedy Central cable channel back when I used to watch cable. The whole show was supposed to be a parody of what was hot on TV at the time, which was reality television, and at the same time poke fun at classic cartoon characters. The show ran from October 2004 to November 2007.

In 2010, The Drawn Together Movie: The Movie! was a direct-to-DVD release. And yes, that is the full title.

There's only one way to describe this movie: It's vile. Take the gore of Akira and Ren and Stimpy, the raunch of Fritz The Cat, top that off with South Park's raunch, then triple that, and you've got TDTM:TM.

The only reason I watched this because I spotted it while perusing some movies on Netflix. Heck, the only reason I even *knew* about it was because I just happened to come across it on the Netflix system. Otherwise I had no clue this movie even existed.

DT was always nasty, but that was part of its charm. The funniest thing I ever saw on the DT show was when Captain Hero decided at the end of an episode to make every single living thing have breasts on it for face, arms, legs, etc. and then he says, "But wait.. I'm an a*s man.. NOOOOOOOOOO!!" I personally thought that was pretty good.

Anyway, this movie is obviously the last hurrah for DT, so the creators decided to make it the nastiest, raunchiest thing possible. And it is as far as a cartoon is concerned. Even before you're 10 minutes into the movie, the cast is stomping kittens to their deaths.

I didn't expect much from this movie, but there was one thing that ticked me off about it. A character dies. I won't tell you which one just in case you want to watch it, but what ticked me off is how the character died. YOU DON'T SEE IT HAPPEN. Okay, so this character decides to do a sacrifice maneuver to save the gang from the enemies attacking them. Right. And even though this movie is FULL of death and gore galore, they do not show this character getting killed off. Instead there's a cutaway and you see blood splatter on the wall. I'm thinking, "What the hell is up with that noise? I'm seeing dismemberment everywhere and they didn't show that? Are you kidding me?" I seriously don't know what the angle was in not showing that.

Other than that, nothing else ticked me off about it except for the super-cheesy jokes which were just annoying.

For some reason, hearing Toot Braunstein call people "a*s bags" was the funniest insult in the flick. Every time she(?) said that, I got a chuckle.

The DT team pulled out as many stops as they could for this movie. They basically wanted to make the most disgusting cartoon possible, and yeah, they did it. I've never seen a cartoon more raunchy and vile than TDTM:TM. It's got filth, cussing, death, dismemberment, antisemitism with "Jew Producer" and his kid "Jew Son" and probably at least 10 other politically incorrect things in it... probably some that don't even have names yet.

Good movie? No. But it's better than Night Patrol. I'll give it that.