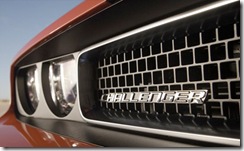 Retro does sell. Or at least it looks cool.

I should be excited about these cars. But I'm not.

I had to think about that. Why am I not excited about cool cars like that? Am I losing the car bug?

My answer to those questions is that my priorities as a driver have changed.

I want to mention before continuing that I already have the one car I thought was unattainable. But it's old and not new. What I'm talking about here is new cars.

My "thing" with driving these days is, simply put, to drive. If I had one of those new-fast-sexy retro rides it would be painful to drive it. I would always be so afraid of going anywhere that would put so much as a tiny scratch in the paint. Putting the car in a parking lot would be a nightmare. What if some rogue shopping cart (or worse yet, another driver) decides to ding my door?

In addition to that, you can't do road trips in one of those retro rides. The gas bill would make you go broke, and you'd be so afraid of anything damaging the car that it wouldn't even be worth it.

Is it worth paying over 30k for that kind of aggravation?

One story in particular convinces me that for-driving cars are far better than for-looking cars.

Long-time friend Ben who lives at the stomping grounds had a mid-80's Chevy Cavalier station wagon he bought for $200. It was in near-mint condition and had low miles. After putting his brain to work he converted it into the Mobile Command Center.

Before the car died (the motor conked out eventually) he drove it everywhere, including a trip to Arizona and back. This car got laughs everywhere he took it. EVERYONE loved this car.

One particular day at a gas station near his house an older gent pulled up in a better-than-showroom condition late-60's Corvette Stingray. He got out of his car and asked..

"That car is amazing!"

This was coming from a guy who had a car anyone would want - but he liked the Mobile Command Center. He stopped just to ask about it.

And would you believe some people actually offered good money for that rat-trap Cavalier? It's true.

As far as the smiles-per-miles factor is concerned, the Cavalier wins. It's a car you can drive anywhere and not care; you can't do that with a new retro car.