Florida isn't the biggest state in the union, but it is the 4th most populated, and 8th most densely populated. The trick here is to live in an area that's not bursting at the seams with people.

This report said FL would have 20.4 million people in it by 2010. That didn't happen and it was off by roughly 1.5 million people. What that report didn't count on was the real estate crash, a whole ton of seniors literally passing on, a whole bunch of people leaving, then a whole bunch that decided not to come here and live elsewhere, and probably many other factors.

Urban sprawl does kill towns and communities, no question, and Florida is full of that - or should I say was. When the real estate crash thing happened, people just stopped buying houses. And a good chunk of the morons who built master planned communities ended up losing their shirts. Lots of very expensive, very empty houses. Even to this day they're still having a problem selling them.

Florida also learned the hard way to stop cutting down trees. Oh sure, now they know to plant, plant, plant and plant some more, but before they were just whacking down forests left and right to put up ugly cookie-cutter housing developments.

The places in Florida that are overpopulated pretty much sealed their fate decades ago. The Tampa/St. Pete/Clearwater area will at some point become uninhabitable, and I have no doubt of this. The cause will be too many people.

Not all of The Sunshine State has people bumping into you everywhere. There's a map here that shows you where the dense parts are. The densest parts of the state are the east and west coastlines because everyone wants to live near the beach, which in other words means Port St Lucie to Miami on the east side and Spring Hill to Naples on the west side are the overpopulated areas.

On my side of the state in Tampa Bay, Pinellas is basically screwed with no way out. Way too dense. There is nowhere to live there without being around tons of people. Next door where I am in Hillsborough on the other hand has slightly more than half of that county screwed, namely the western half. The east side is still relatively okay.

This is a rough outline of Hillsborough County that I grabbed from here. 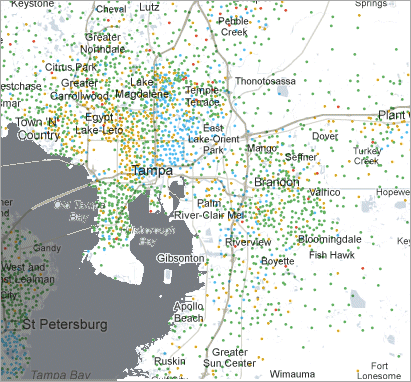 Every dot represents 500 people, and you can easily see where the less populated areas are. This proves that you can live in an area of Florida that's not wall-to-wall people.

At one point I actually considered moving to Pinellas, and I'm very glad I didn't because I would have hated it there.

Other than people wanting to be near the beach, you can easily see on the map that people gravitate towards the interstates. The thicker gray lines you see are roads of that type, namely I-75, I-275 and I-4. Once you start getting away from interstates, population becomes much less dense.

I fortunately live in an area that's not too densely populated, and I sincerely appreciate it.