i am the chrome dinette

Title of this entry is a lyric from a song most people have never heard (and probably never will).

Another blogger clogging the series of tubes on the internet

My boss is now blogging, so good for him (I mean that sincerely). I guess I'm partly to "blame" for it. 🙂 He also made a mention of my site in his newsletter, so cool beans there too.

On the 20th of November I will have officially been here (as in a true resident of the State of Florida) seven months. I am 1,300 miles away from the place I used to call home. Home is where I am now - and that's perfectly fine'n'dandy with me because that's the way I wanted it. Anyone who's been reading my site for a while knows all too well that I'm very happy here.

My brain still thinks that I'll wake up tomorrow only to find a foot of snow outside.

And yeah, if you couldn't tell, I hate snow. I do not use the word "hate" very often because it has such a strong negative meaning, but yeah, I hate snow. Screw that stuff. "White goodness" it is certainly not. 🙂 Not to me, anyway.

And now I feel like putting a picture of KITT crashing through a wall for absolutely no reason. 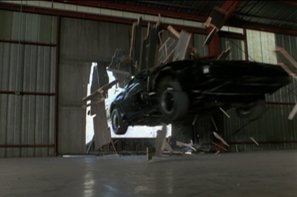