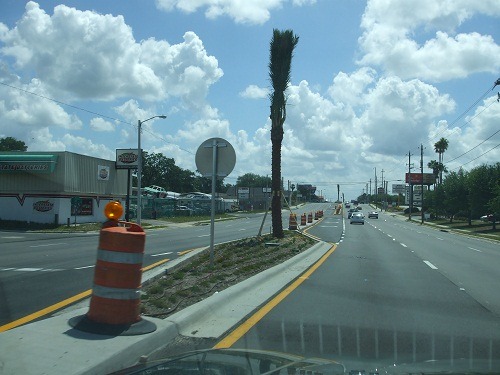 When the city of Tampa decided to do road reconstruction along E Busch Blvd. they removed all the greenery in the medians. Bad call on their part and I'm sure it upset more than a few people (including me).

After a really long time they finally started putting some of the greenery back as seen in this photo with a newly planted palm tree along with some grass.

This can be seen in most of the divider medians now, and looks a million times better than plain concrete.

Over time the palms will "bloom" out and look nice.

However there's one drawback to this. Previously there were bushes that didn't spill any dead foliage into the road. These palms on the other hand will when dead leaves fall down as new ones grow in.

One hopes the city of Tampa planned for periodic cleanup of that kind when putting these trees in.