Was having a conversation at work today with my co-workers about cars. I mentioned how someday I would like to own a Chevy Corvette (somewhere between the years 1984 and 1990) just because I like the car. Of course I get instantly bashed for this because most of my co-worker friends are BMW fans, and if given the choice between a BMW M5 and a Corvette they would go with the Beamer any day of the week and twice on Sunday. (grin)

I tried to explain my point of view of why I wanted the 'Vette in the first place. Some understood why, most didn't. Here's some of the questions I got asked and how I answered them:

Yes. It's a sports car and low to the ground. Of course it will have a stiff/harsh ride. It's part of the whole experience. I seriously could not imagine riding in a 'Vette that rides like a cloud. It's just not what the car is about. Sports cars should not ride like your grandpa's Cadillac. That would just be weird.

Depends on your point of view. In my experience I have never ridden in a slow Corvette - ever. They all have plenty of go-power under the right foot. Besides which there is a difference between driving fast and driving fast well (this point was agreed upon no matter what car you own).

As I've said to a lot of people, I don't necessarily like to drive fast all the time. Yes I've had my moments on the highway where I have gone 100+ miles an hour. It's rare when I do it and every time I do it I just think to myself "Sheesh that was a dumb move." And it is. Driving anywhere over 80mph on the highway is aiming a car - not driving it. "Aiming" means "aiming to hit another car and/or spin out of control". No thanks. (grin)

Another thing I've said to a lot of people is that I would much rather cruise than drive fast. I prefer cruising to fast driving any day; to me this is a much more enjoyable driving experience. I know a lot of fast drivers, and to be honest when I mention the whole cruising thing they just don't get it. Harley-Davidson motorcycle drivers on the other hand do understand what I'm talking about. They full well understand that they have machines that can go well over 100mph - but you don't have to. The experience of being on the open road is all that is required. It doesn't matter how fast you get there.

And now my little comparo on BMW M5 vs. Corvette:

Put an M5 and a 'Vette in a parking lot next to each other and the 'Vette will ALWAYS get noticed first.

Kids identify Corvettes from a mile away (never M5's). The shape of the car is much more distinctive and recognizable. Unless you already know what an M5 looks like, you can't identify it until you get up close.

Girls get more of that "Wow" factor from a 'Vette than an M5 (more on this in a moment).

While M5's have "class", 'Vette's have way more attitude. It's a very American car while the German M5 is much more subdued (by design).

More on the "wow" factor:

A Corvette needs no introduction, ever. It's look (for the year I'm looking for) is timeless. It does not need any explanation as to what it is or what it can do. You see one and your eyes stick to it like glue and you stare - that's the whole intent. Most girls (and I've talked to a few about this) when given the choice of what they would rather ride in would pick the 'Vette. Why? "Because it's a 'Vette".

That to me says it all. (grin)

And no I don't want a 'Vette for chicks. I want one because I like Chevy's, I love the digital dashboard (yes I do - stop whining about them) and I just plain love the "cool factor" of the car as a whole.

Someone once said to me "You know, the only people I've ever known who've owned 'Vettes are jerks." Should fit me quite well then (haHA!!) 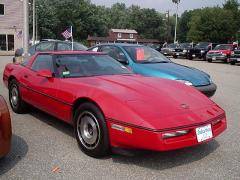