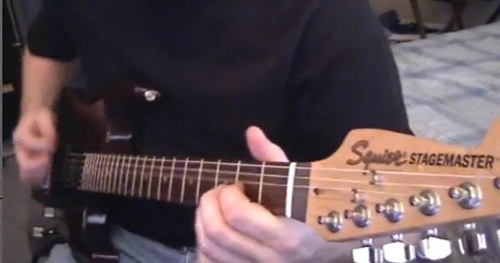 As I've been working on writing new material, I came to conclusion that yep, I needed a guitar with the HSS (humbucker, single, single) layout. It had to be a Strat-shaped guitar (any Strat with the HSS is commonly known as a "Fat Strat") and it had to be cheap, so I had decided on buying a Squier Bullet Strat HSS for $119.

Now before continuing, a few things to note.

Second, I was planning on replacing "The Burnside" that I junked because it just fell apart. That guitar was bought for $89 originally and yes, there were things wrong with it - but I knew that up front. She served as well as she could but ultimately let go at the end.

Third, yes I have a Schecter C-1 Classic with an HH layout that I bought new years ago and still have, but I just don't play it because it doesn't feel right anymore. There's nothing wrong with the way it plays, but there's no magic. I'm even thinking of selling it at this point.

The thing that really bothered me is that the Squier Bullet Strat HSS only comes in three colors at the time I write this, none of which I wanted. Arctic White, which I already own in an SSS flavor and didn't want another, Brown Sunburst (bleah), and Black. I was going to go for the Black.

I trot on down to Guitar Center and start looking around for Squier Bullet Strats, but then I noticed something. A crazy-ass reverse-headstock Squier with a $125 price tag. It was dusty (meaning it probably hadn't been played in a week or more) but it had the HSS layout I wanted. I picked it up and started playing. Other than just a tiny dent in the back, the guitar was perfect.

Well, I was sold. I go to the counter and told the guy I'd offer $100 for it. We haggled and were able to whittle the price down to $110 with tax included. I paid and left happy.

It's a China-made 2001 Squier Stagemaster, 2nd generation. The first gen had a pick guard, full Floyd-Rose setup and HSH layout. The 2nd was simplified with no pick guard and offered with or without the Floyd tremolo. Mine is the low-end model, but it happens to be in the exact config I like because I don't like Floyd-Rose trems.

Is the Stagemaster a Stratocaster? No. It might be shaped like one, but it's its own thing.

After doing some research on this guitar, this is what I've found out.

The neck has a 12.6-inch radius, which is way flatter than the standard 9.5-inch and flatter than a Les Paul neck. What this means is that the neck is blisteringly fast when played, and it is. The hardware on this guitar is all premium stuff - except the pickups which are ceramic magnet but that's fine and I don't mind that. For example, the 5-way toggle switch, volume/tone knobs and string tuners are all smooth as silk - no cheap stuff here. Third, because of the reverse headstock, the strings and absolutely straight from the nut to the post. What that means is this guitar stays in tune like nobody's business, because the straighter your string is after the nut (assuming no locking nut), the better it will stay in tune, and all strings are all straight-as-an-arrow after the nut.

A big selling point on this guitar for me was the headstock. Ordinarily I absolutely hate reverse headstocks, but this one's different. The guitar basically looks like a super-hot-rodded Jimi Hendrix Stratocaster and does not look cheap even though I paid a low price for it. And the 1970s-style "STAGEMASTER" logo really completes the look. This guitar looks and feels like something you'd pay $500 for easily - and I'm not kidding when I say that because it's a solid instrument.

Last but not least, this guitar has for all intents and purposes never been played. It's in near-mint condition with zero fret wear and has never been broken in properly. To find a guitar.. any guitar.. that's 10 years old with this kind of playability, quality hardware and near-flawless condition is unheard of at the price I paid for it.

A true diamond in the rough? I think so, and I'm very happy with it. Hopefully it will stand the test of time as I put her through her paces.