turn on the radio 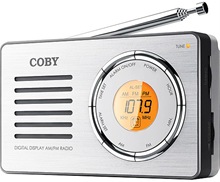 Pictured: Something I had to buy online because I absolutely could not find it on store shelves.

Yes, it is what you think it is; a small battery-powered portable digital AM/FM radio.

I offer you a challenge. Try to find one of these anywhere new for under 10 bucks on a store shelf. Seriously. Try and find one. Don't be surprised when you end up empty-handed.

See, here's the deal. Radio is one of those things so simple that it escapes people how good it actually is.

Why small? Because you don't need a big one and you can move it around easily.

Why digital? Because it's easier to pick a station.

Why battery-powered? Because a radio can last on two plain ol' AA or AAA batteries for almost a year or longer before they need to be changed. This is a receive-only device, and since there's no transmitting involved, the batteries last a really, really long time.

Most importantly, your local station will give you all the news, weather, information and entertainment you want without having to look at it while you're doing stuff - FOR FREE. All you need is the radio.

Here in Tampa there are lots of announcements made via radio-only that you wouldn't get informed of on television or in the paper. Make no mistake, radio commands a very large audience. If it didn't, none of the stations would still be transmitting.

Also, you cannot watch television or mess around on the internet and get stuff done at the same time. Not possible. Anyone who says otherwise is lying to themselves.

I seriously recommend picking one of these up. Unfortunately the only kind on the shelves these days are clock-radios with analog wheels to choose the station (as in the kind that go on a nightstand), but hey, better than nothing I suppose. Click it on and you'll discover it's just the thing you were looking for while doing other stuff.

The fact I had to custom-order this thing online is ridiculous because it used to be available in any store that sold electronics. Wal-Mart, K-Mart, Radio Shack, wherever... didn't matter. They all used to have them. And I am very sure that if places that sold electronics stocked these things, they'd all sell and fast.

Thankfully the price of one is more or less the same as its always been, but again, I had to custom order a radio? There's just something very wrong with that.