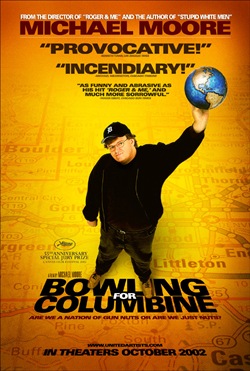 Bowling For Columbine is a 2002 movie from director Michael Moore. Films by Moore are either flicks you love or you hate, and I personally like the stuff he does. No, I don't agree with everything he says, but if there's one thing he knows how to do really well, it's research; some of the stats mentioned in this movie will send a chill down your spine.

Even though this flick is a decade old now, a lot of what it covers is still relevant now. There's still a huge problem with gun-related violence in America, the news stations are still fear-mongering just as much as they were if not more now, and tensions about the security of the American civilian are higher compared to when this film was released in '02.

If you decide to watch this movie, it's not a feel-good flick. Not at all. Even so, it's still worth viewing so you can see the "progression" of what's happened from then to now (i.e. it's amazing how little has changed, and any changes that have been made went from bad to worse).